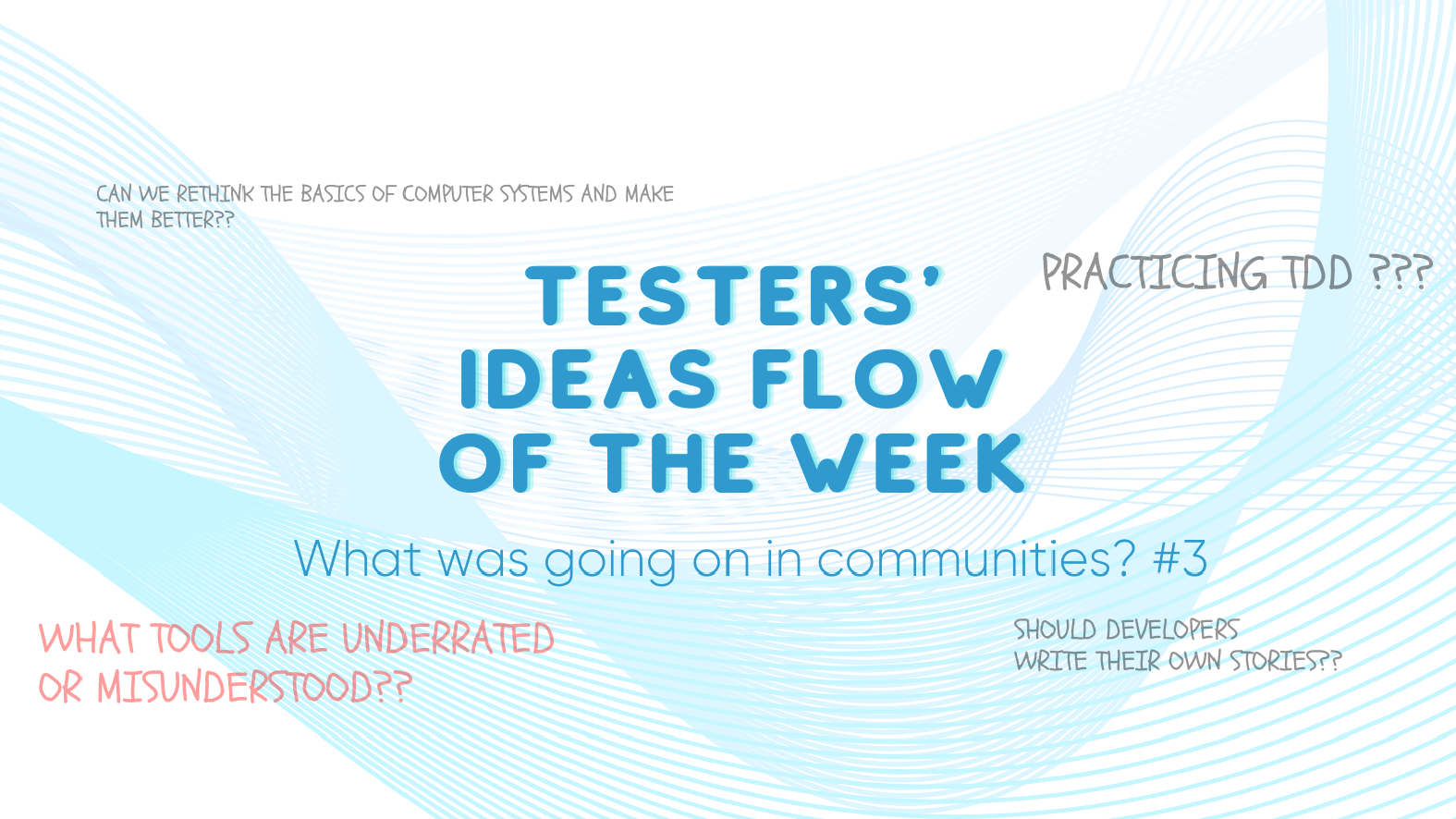 Testers’ ideas flow of the week: TDD, QA taking work of IT support and poor testability

So you don’t need to subscribe to dozens of groups and channels – everything the most important is here. Follow the Software Testing Talks Facebook group and r/softwaretestingtalks Reddit community to get our weekly discussions lists directly to your feed.

Briefly, here is what folks were talking about during the last week:

💡 Automation testing and framework – where to start?

💡 How to lightly guide my team towards practicing TDD?

💡 With the knowledge we currently have, can we rethink the basics of computer systems and make them better?

💡 Should QA take some work of IT support?

💡 Tests shouldn’t be based merely on what you think users will do, but instead on how users actually use the software

Let’s dive deeper into the most interesting opinions.

Automation testing and framework – where to start?

I’ve recently joined a company as a QA Engineer (my background has been predominantly focused on manual testing). I am the only tester in the company, and have been tasked with getting automation testing setup and running. We have no scripts, i’m mapping out the system piece by piece so I know roughly how many tests need to be made, and i’m also running a department AND testing at the same time. Frankly, there aren’t enough hours in a day for me to sit down and spend a week researching this stuff. I have approximately a year to have everything done.

I am by no means a coder, but i’ve bought a highly recommended Javascript for test automation book.

But before I even get to scripting, I need to work out the best tools, the best approach, and then get things setup so I can at least start looking to code and script – after watching several hour long videos on Youtube i’ve come away more nervous in making any decision.

So if you were me, where would you start? What would you use?

The application I need to test is a web based application. Our CI/CD pipeline DOES NOT use Jenkins (we use AWS CodePipeline – so also gotta try and wrap my head around that) and like I said, i’ve not done this before.

I hope that’s enough info to point me in a solid direction? 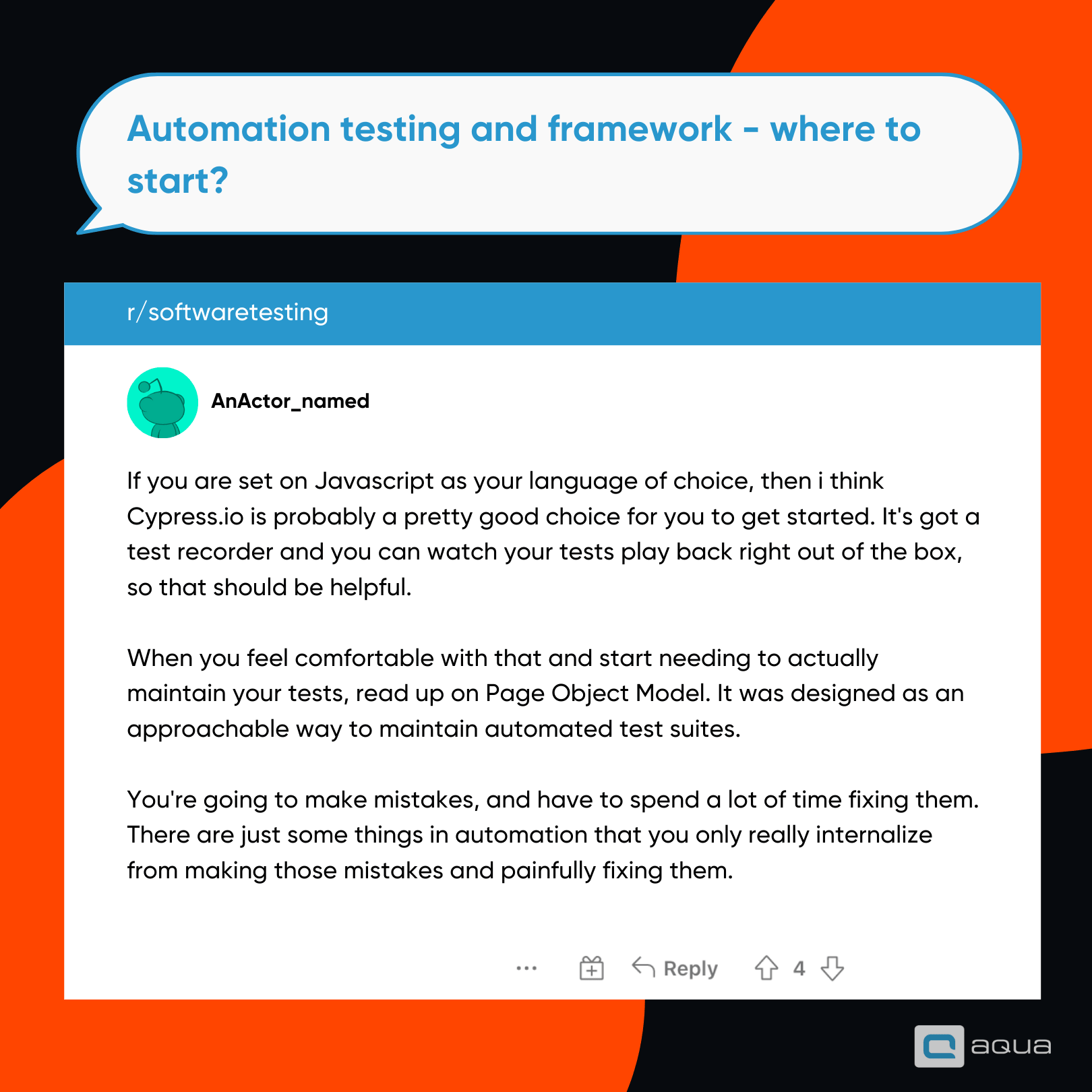 How to lightly guide my team towards practicing TDD?

Hello, For a long time our entire frontend repo had absolutely no testing. No unit testing whatsoever, no E2E or anything. When I joined the team I saw this as a massive issue and failure point of course, and I actually (with permission from my manager) got Mocha and Enzyme set up for it.

However, the issue I’m now seeing is that the team seems afraid to try to learn how testing works. Even the manager is hesitant, and he isn’t enforcing testing at all (despite being super hype for it and definitely excited upon seeing me show it off). I’m the only one with any kind of testing experience on the team. It’s like he loves the idea, but keeps putting off actually trying it (we aren’t in a very busy time either, not exactly swamped).

I know you can’t teach an old dog new tricks, but is there any way to increase adoption? I’ve made thorough documentation on the subject, included a test file in the module creation script for each new module, and we’re about to get CI up for the frontend which will check for tests in the suite (and fail if there are no tests for a module which is being released to prod).

I also just don’t want to overstep boundaries either and seem mean about it, I just know we’ll see gains tenfold when we all use it.
Thank you! 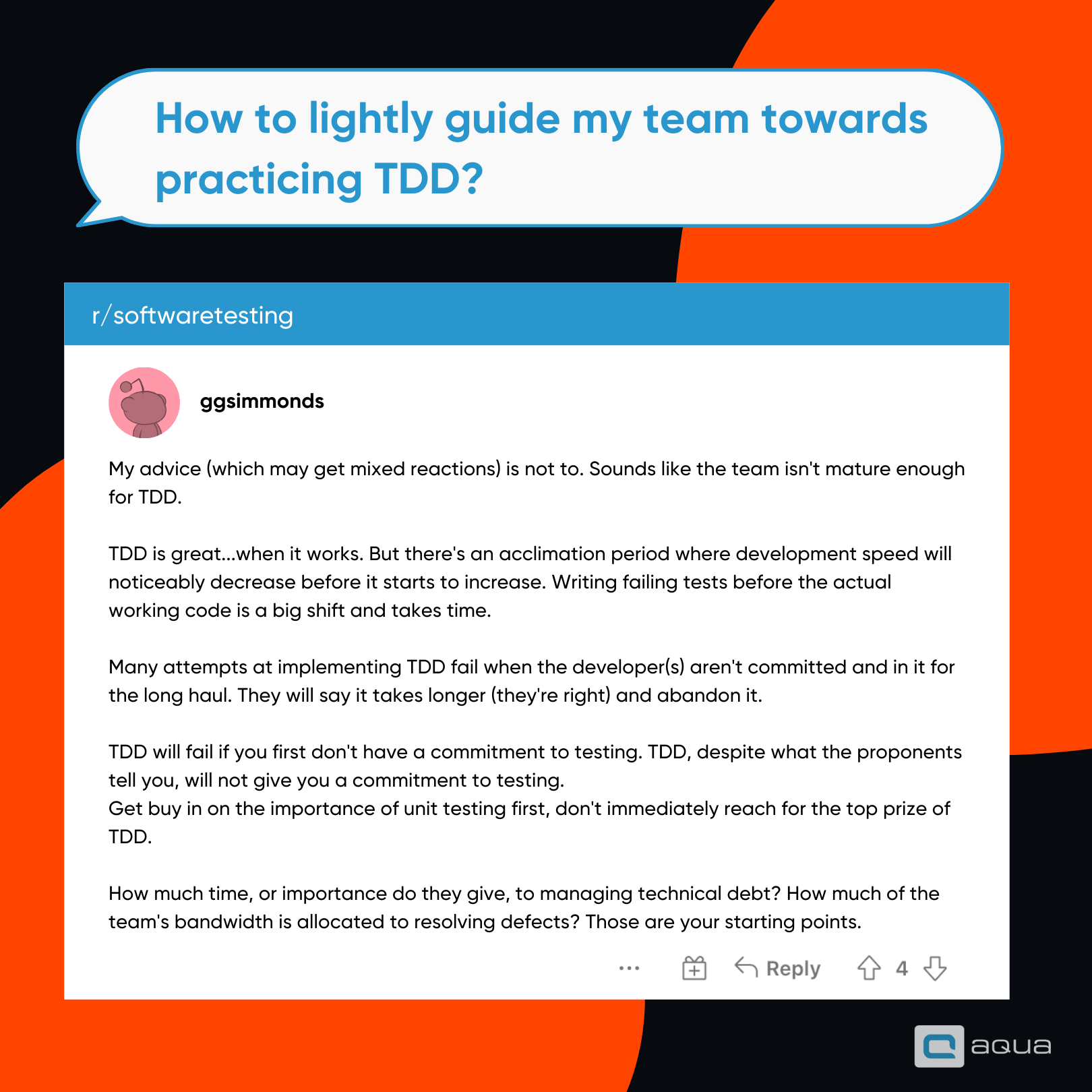 With the knowledge we currently have, can we rethink the basics of computer systems and make them better?

I am taking a computer systems course right now and I was wondering if we could take a look again at the basics of the computer, I mean the very fundamental basics of a computer, and rethink how they work and possibly make them better? In other words, are Von Neumann and Alan Turnings’ implementations perfect, or could we make them better? 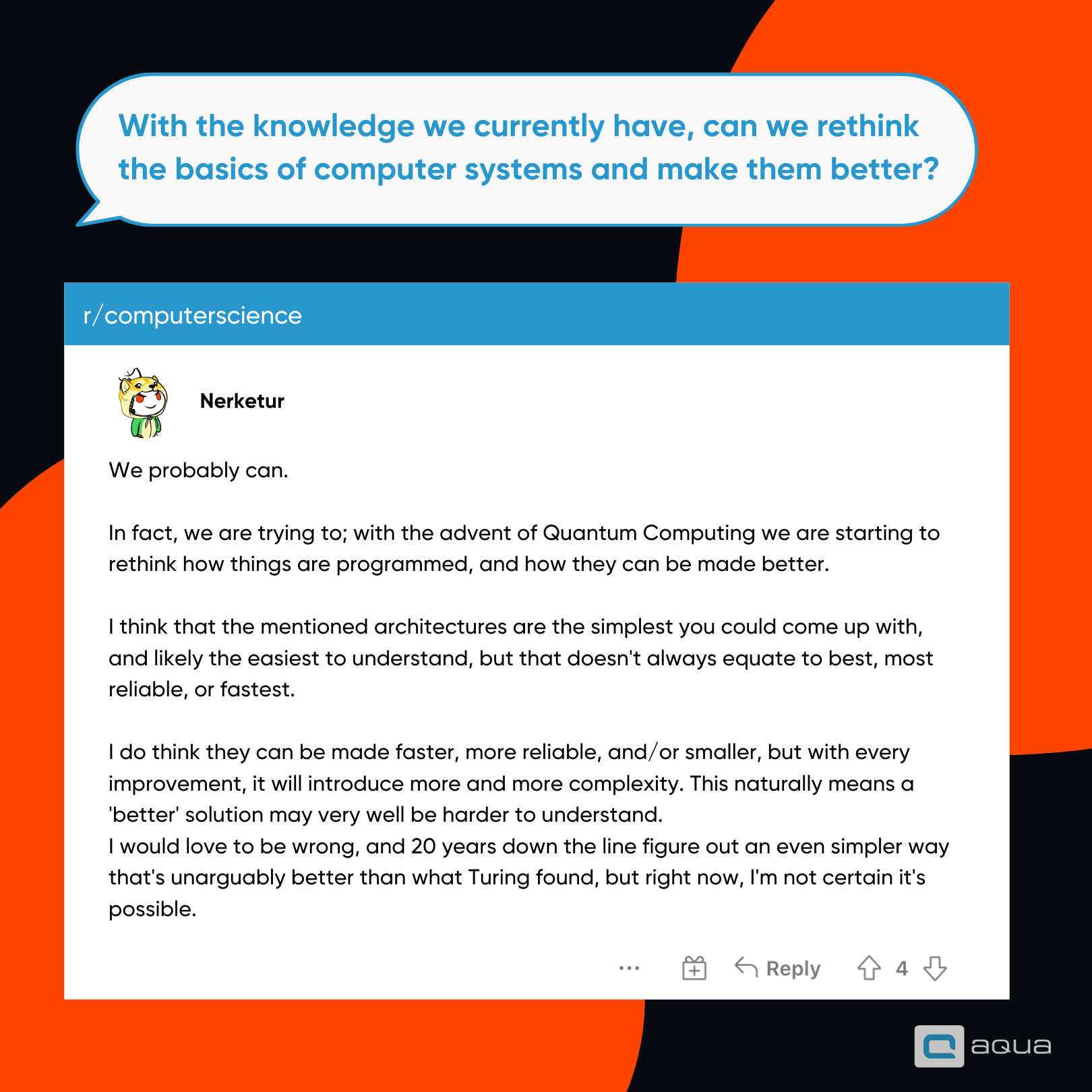 Should QA take some work of IT support?

I’ve been working as manual software tester in a industry company for 1 year.

For testing work, I need to do regression test (with another QA from outsource) every month for software A, which is developed since 8 years but still developed with new features frequently. Beisides I’m the only one, who is responsible for testing of a module of application B, incl. write test plan (QA leader quitted in May this year), design test cases, execute them, do regression, find and track bugs etc.

I have also clarified my thoughts with our IT leader, but he thinks the support job is a good way for QA, to understand the software more better from user’s aspect.

So I’m looking for your advices and would greatly appreciate, if you can share your opinions or experience, thank you! 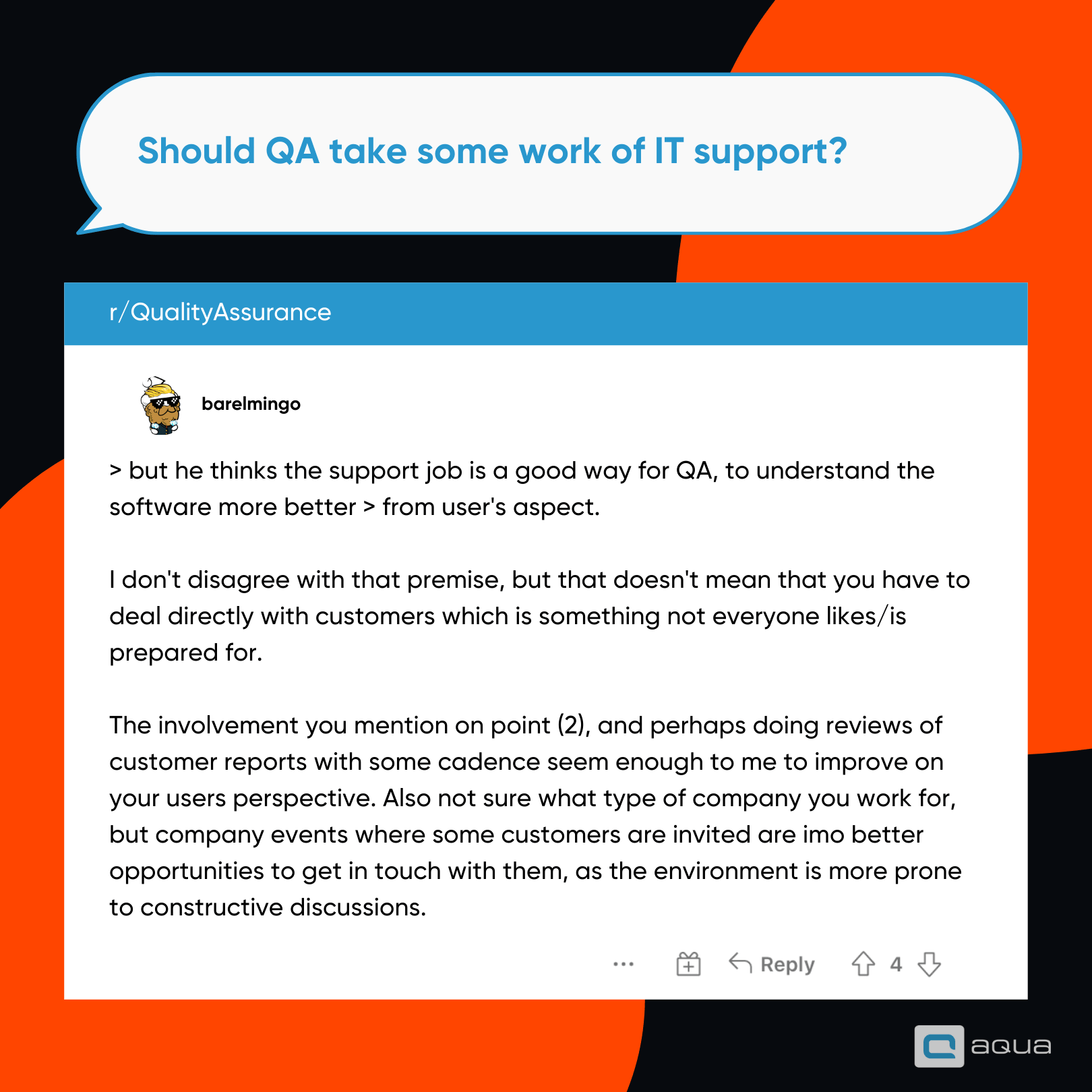 Let’s take a look at some great insights from software testing influencers. 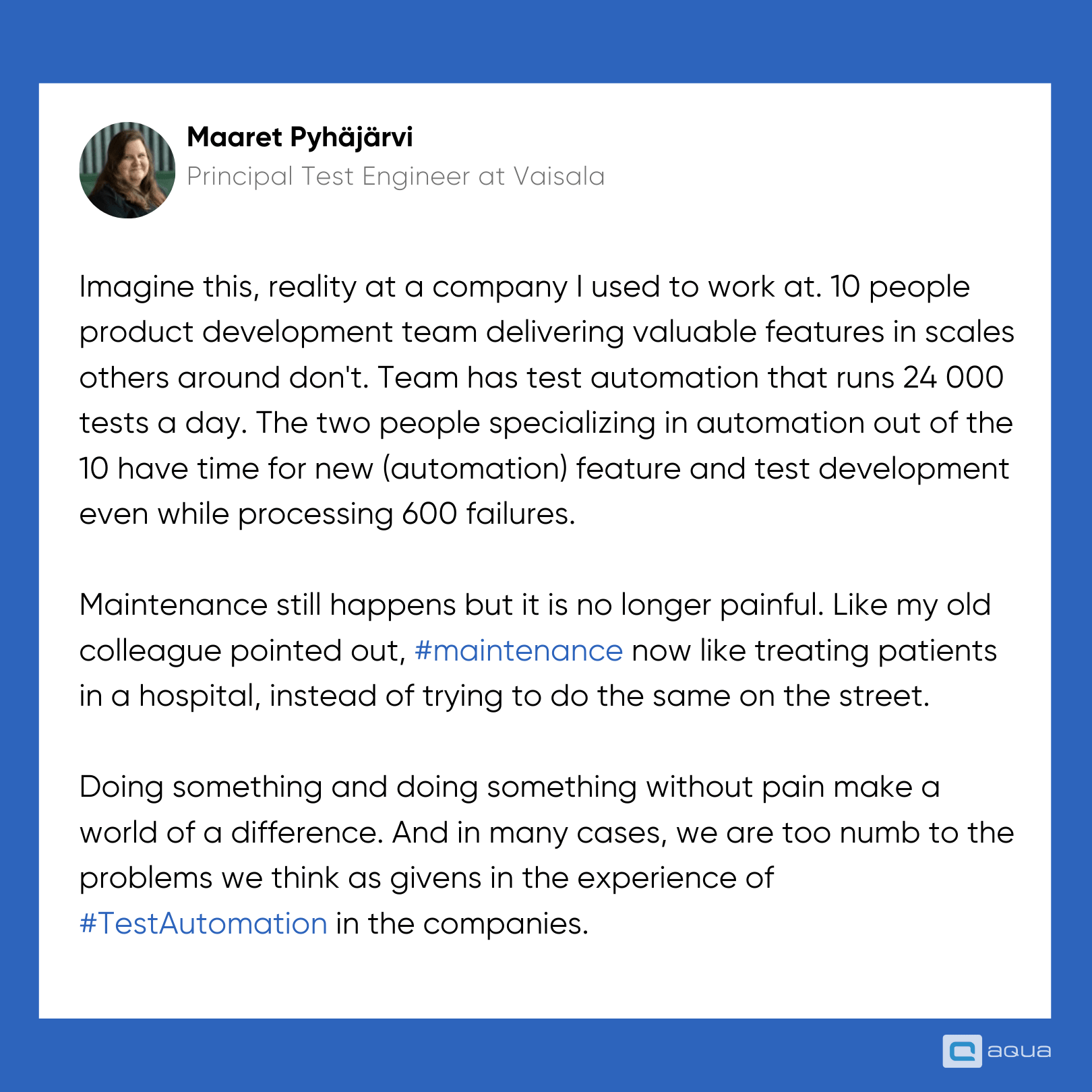 Maaret Pyhäjärvi shared on her page some memories from the company she used to work at.

When Maaret was asked to tell how they organized such a workflow, she kindly shared a link to the detailed study on the processes built in this team. That’s very thought-provoking research which I recommend to everyone who is interested in a test automation improvement in your team. 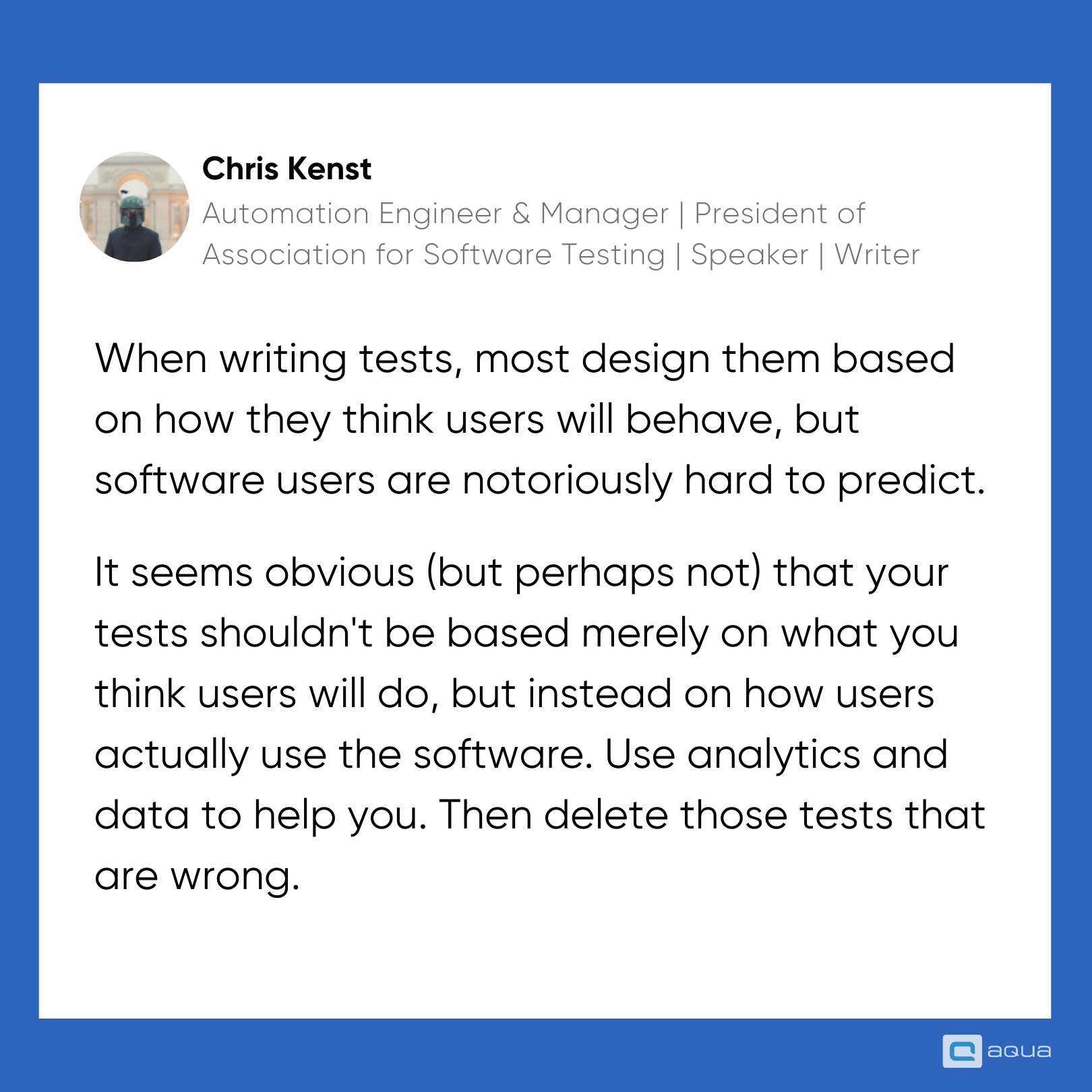 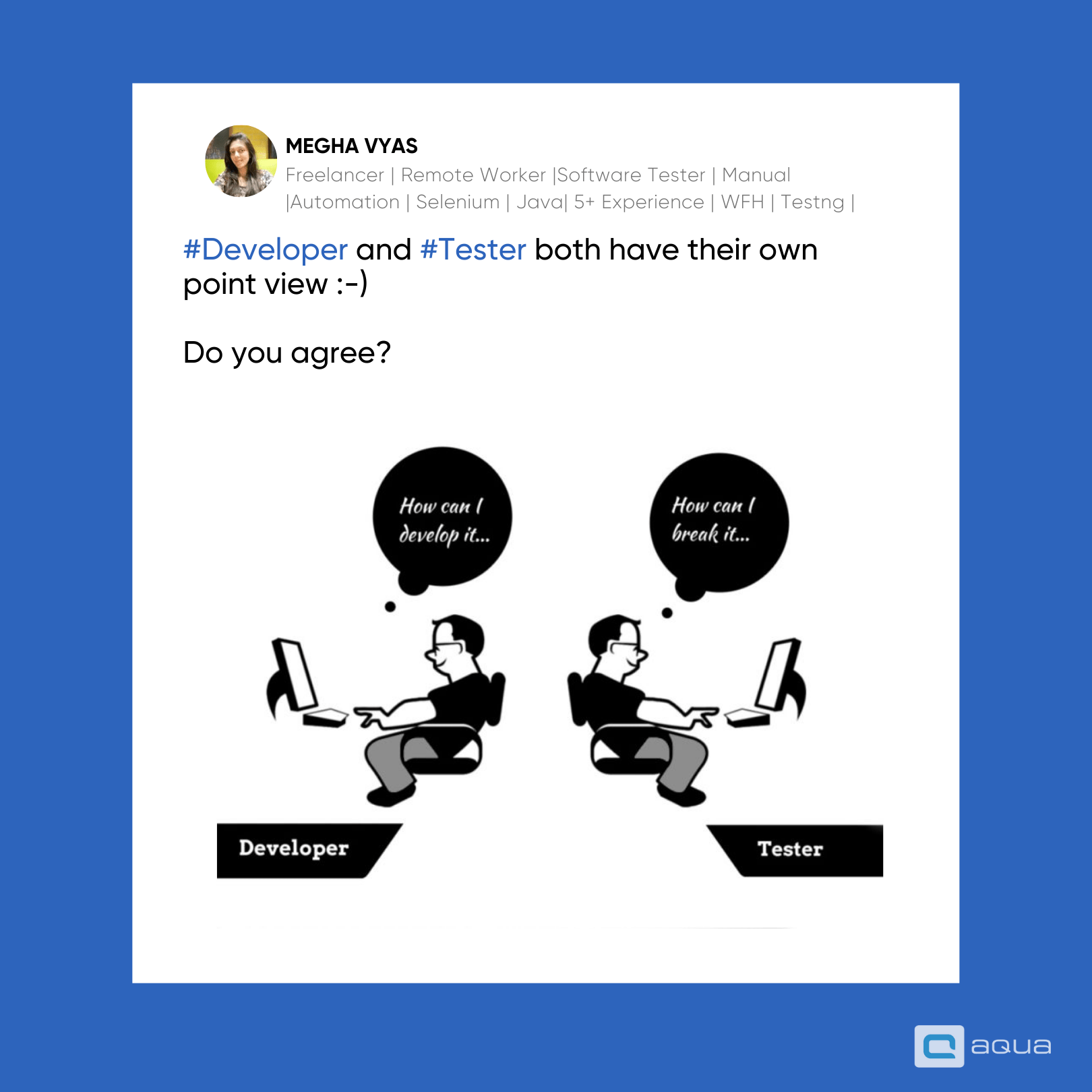 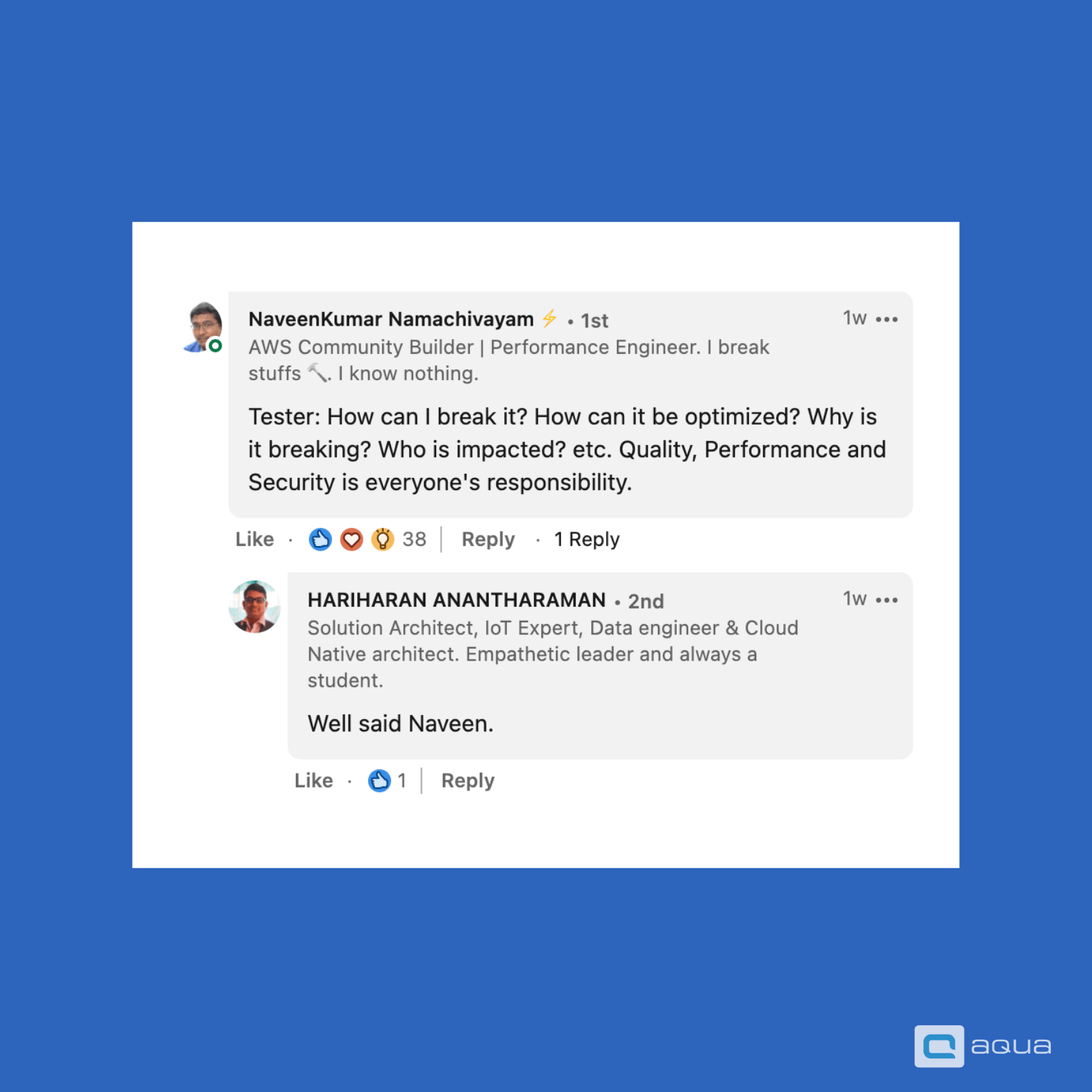 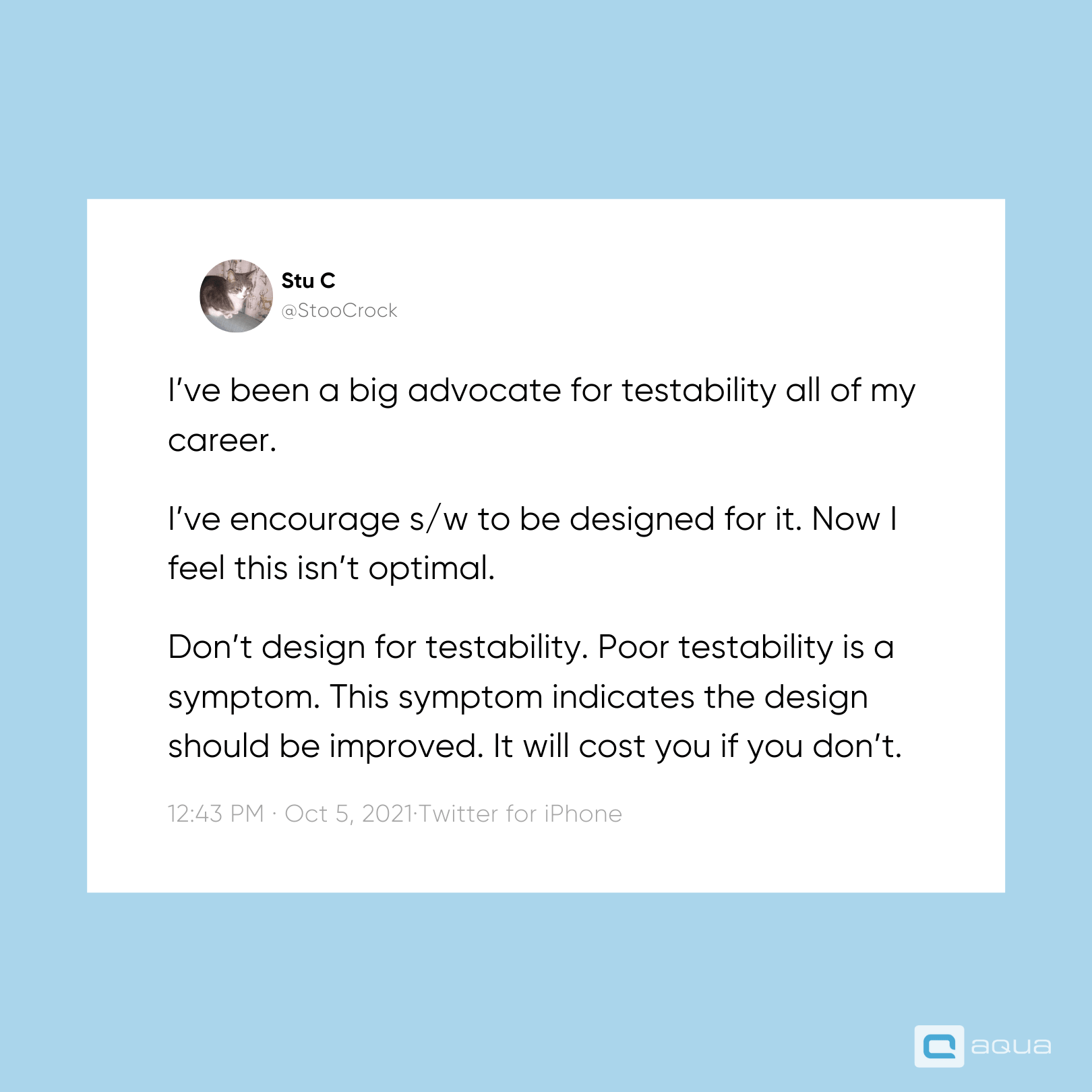 And, of course, some thoughts about Facebook going down: 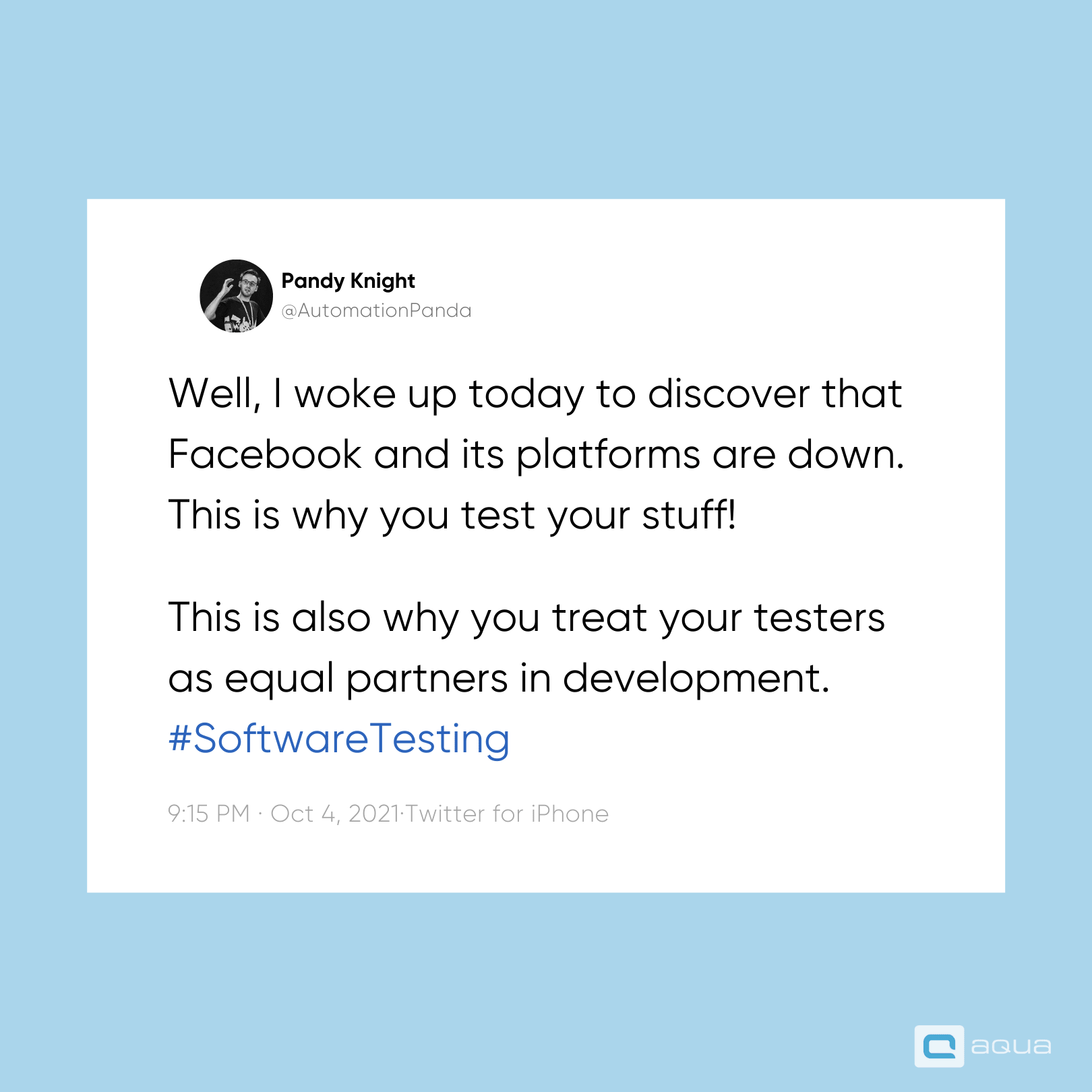 So now you know what was going on in the software testing community last week. Follow the Software Testers Ideas Flow group on FB and r/softwaretestingtalks on Reddit to get testers’ ideas flow of every week directly to your feed.

Feel free to contact me on Linkedin if you have any suggestions or ideas about Testers’ Ideas Flow blogs. I am always happy to connect with testers and get even more discussions to my feed 🙂